Foreign aid is a controversial topic for many reasons. One objection to foreign aid is that it can be delivered to the wrong people on purpose or accidentally (for example, theft). However, giving aid can produce many benefits: it can improve the relations between nations and rebuild living standards.

Foreign aid refers to humanitarian, international, and usually inter-governmental figures or groups that give economic, military, financial or technical resources, such as weapons, to a nation or nations. This aid can be in many forms, such as bilateral or multilateral.

Some examples of aid programs include George Marshall’s Marshall Plan that began in 1948, the Point Four Program, and the UK’s Commonwealth Development Fund.

“ODA consists of flows to developing countries and multilateral institutions provided by official agencies, including state and local governments, or by their executive agencies, each transaction of which meets the following test: a) it is administered with the promotion of the economic development and welfare of developing countries as its main objective, and b) it is concessional in character and contains a grant element of at least 25% (calculated at a rate of discount of 10%).”

In order for foreign aid to work, it must cater to the climate of the receiver of the aid. This means that the hardships of the suffering location or the receiver of the aid must be analyzed to select the correct type of aid and to deliver it at the appropriate time. The objectives of the aid must be specified and the most suitable solutions must be chosen to ensure that the aid will not be given to the wrong people or area that needs improving.

Foreign aid can be used to improve the conduct of allies, to reward a nation for its conduct, or to eventually get a repayment of some sort from the nation receiving the aid.

Bilateral aid involves two nations where one government sends aid to another government.

Multilateral is where funding is delivered by two or more nations to international organisations such as the World Bank (also called the International Bank for Reconstruction and Development) or the International Monetary Fund who have the role of improving suffering nations.

Tied aid is a bilateral agreement where the donor nation delivers a loan or grant to the nation receiving it, but specify the nation in which the funding is spent.

Project aid is given to improve a certain project, such as a school.

Voluntary aid usually refers to charity. One example of this is Doctors Without Borders, “an international humanitarian non-governmental organization best known for its projects in war-torn regions and developing countries affected by endemic diseases.”

According to the Organisation for Economic Co-operation and Development, these nations gave the most Official Development Assistance (ODA) in total in 2015: 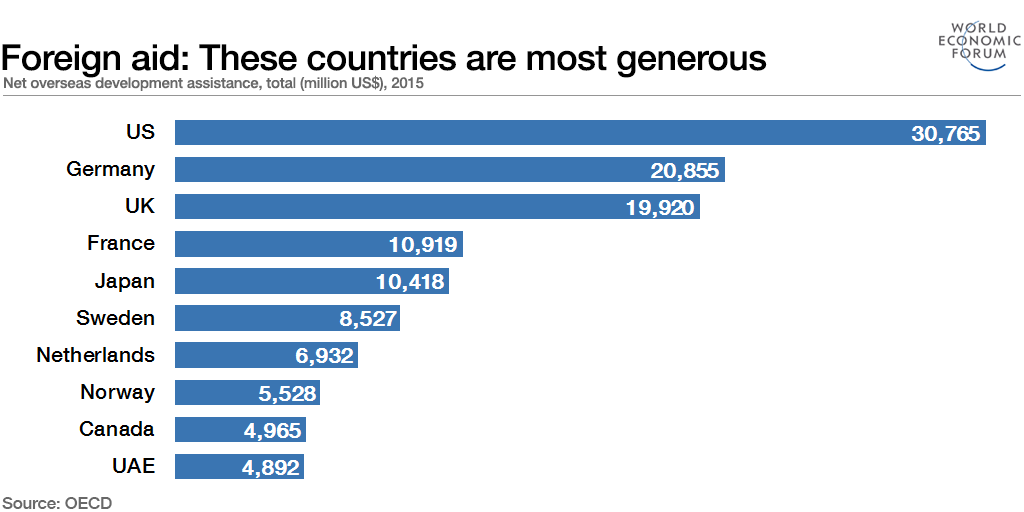 However, when considering it as a percentage of gross national income (GNI), the ranking order of the countries is different: 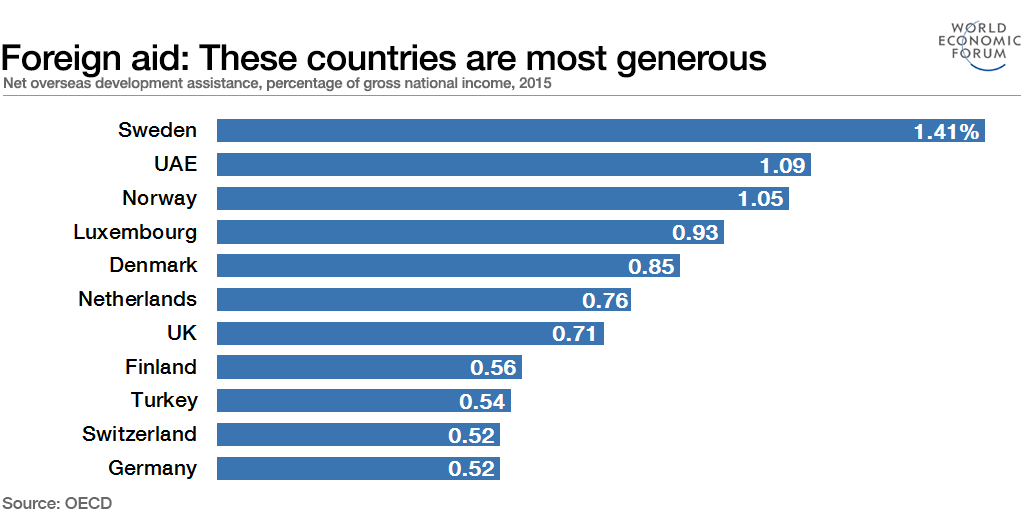 The top ten recipients of U.S foreign aid in 2018 are as follows:

There are academic disagreements regarding the efficiency of giving foreign aid. These include; the factors that influence the economic efficiency of foreign aid; whether aid should be measured empirically; whether aid should be given to non-government organisations and groups, rather than governments, who then improve the economy from the bottom up; the opposite, top-down approach by delivering aid to governments, the World Bank, and the UN who rebuild suffering nations; and whether aid givers truly know what is needed by aid receivers.