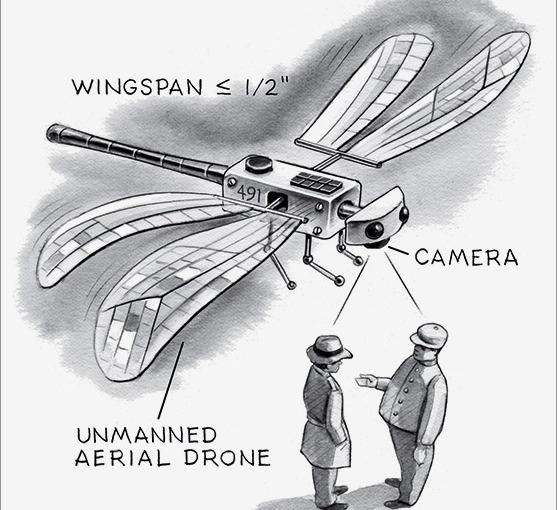 In the 1970’s, the Central Intelligence Agency (CIA) created a spy drone called the Inectothopter that looks like a dragonfly.

These insect spy drones are used as surveillance technology that is disguised as everyday bugs and are that small that there is very small suspicion as to what their purpose is.

In an interview with the British Daily Mail, Zoologist Richard Bomphrey explains how flying creatures such as insects have been studied in order to understand how insect wings have have evolved to endure tough conditions. From studying this, important lessons can be learned:

“By learning those lessons, our findings will make it possible to aerodynamically engineer a new breed of surveillance vehicles that, because they are as small as insects and also fly like them, completely blend into their surroundings.”

Drones that look like other animals, such as a hawk, are also in existence and being created.

In 2007, the U.S military was accused of having insect spy technology when U.S anti-war protesters saw these drones flying above them. Government agencies at the time generally did not admit to having this technology, but some official and private organisations did admit to it.

Then, in 2008, the U.S military showed these inventions that are as “tiny as bumblebees” and were used to discretely “photograph, record, and even attack insurgents and terrorists.”

Whenever the military makes something public, it’s existence is usually decades old.

The Defense Advanced Research Projects Agency (DARPA) is reportedly planning to create laser weapons though The Excalibur Program, nanobots in the human body to monitor one’s health, cyborg technology where implants and improvements reliably connect to the human central nervous system via DARPA’s Reliable Neural-Interface Technology (RE-NET) program, Micro-technology for Positioning, Navigation, and Timing (MICRO-PNT) program  where GPS systems continue to work after losing signal, and other technology such as a gamma-ray laser called the Ultrabeam.