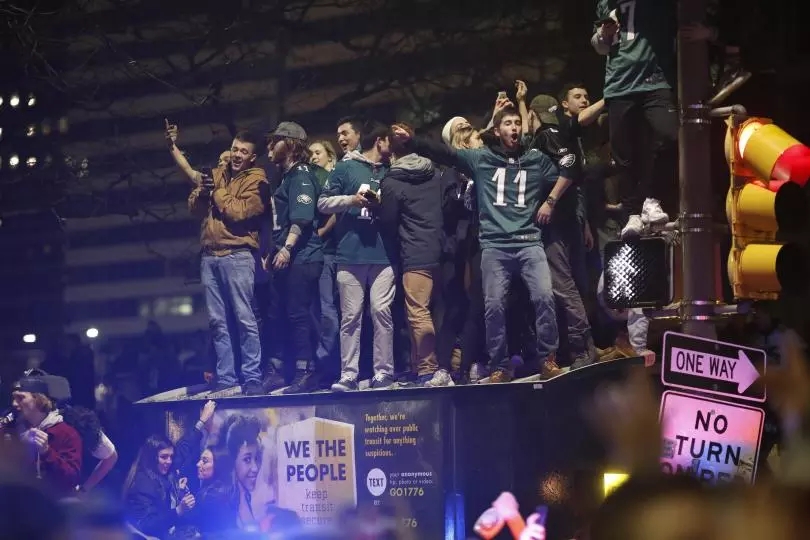 Drunken fans of Philadelphia’s Super Bowl-winning team the Philadelphia Eagles took to the streets Sunday Night through Monday in violent and destructive riots, causing a considerable amount of property damage.

The Philadelphia Eagles have never won the Super Bowl before. The Eagles were the underdogs going into the big game and clinched the win versus the back to back Super Bowl champions the New England Patriots. Instead of the result of this historic event being praise and acclamation, the night resulted in thousands of intoxicated fans rioting in the streets. In some cases, riots resulted in property damage.

It is believed that a great deal of the rioting including several injured due to a car flipping, came from a Super Bowl party at Temple University that had overflowed into the streets.

The Philadelphia police and Pennsylvania State Police both made attempted to control the situation according to Photojournalist Patrick T. Fallon, who was injured by a rioter on a quad bike.

Officers expressed that they feared that they didn’t have enough resources to handle the situation. Police drones even estimated that there was a total of around 100,000 on the city streets after the game.

While the riots following the game had a huge fallout for public safety the Super Bowl Parade is still set to take place on Thursday morning.

Hawk Newsome, the President of Black Lives Matter New York, spoke with Newsweek’s Chantal Da Silva for an article where he expressed his feelings and concern on how officials handled security on Super Bowl night. “Somehow, it seems there’s a line drawn in the sand where the destruction of property because of a sports victory is OK and acceptable in America,” Newsome stated. “However, if you have people who are fighting for their most basic human right, the right to live, they will be condemned.”

Newsome also suggested that the ways officials handled the post-game riots were a “glaring example of white privilege.” It’s unlikely that the cities insufficient resources to deal with the riots were due to “white privilege”, however it is important to consider the sheer size of the riots. Remember that an estimated 100,000 people were on the streets during the riots. The police force was completely outnumbered by dangerous rioters. Mayor of Philadelphia Jim Kenney said in an announcement regarding parade details that the Super Bowl parade will have even more security and police coverage to account for a high viewer turnout.