Oakland, National Security – Oakland Mayor Libby Schaaf (D) has been widely criticized after having sent a notice to the public warning that the Immigration Customs and Enforcement (ICE) would be conducting raids on February 24. Mrs. Schaaf says she does not regret her decision. The day after the operation was conducted, she shared the messaged on Twitter: 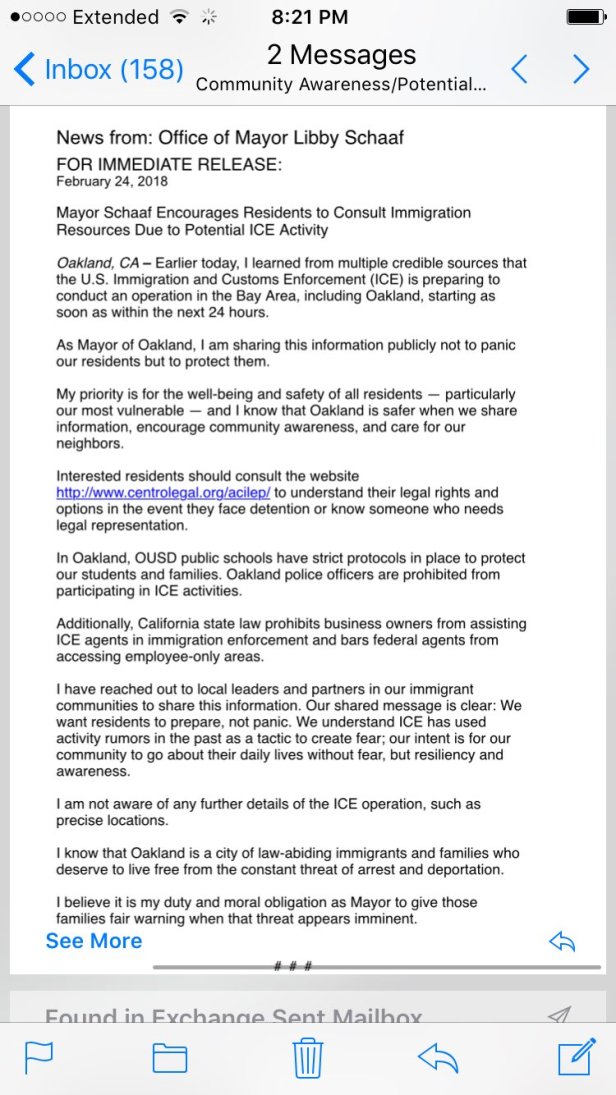 Acting ICE Director Thomas Homan later announced that there were about 800 undocumented immigrants ICE was unable to document due to this move. He also criticized Schaaf for being no better than a ‘gang lookout’ shouting ‘police’ when they come to the neighborhood, but that this was rather shared with a whole community. He further noted that ‘This is a whole new low, to intentionally warn criminals that law enforcement is coming.’ Criminal defense attorney Jonna Spoilbor said on Fox News that this was a ‘text-book definition of obstruction of justice,’ and that Schaaf has risked up to 10 years emprisonment. She added that she couldn’t see how Schaaf could get around being found guilty of obstruction, as it is such a clear case with the warning to a whole community that the law enforcement is coming to investigate.

Criticism isn’t all Schaaf has received following this decision, however. She has for instance been supported by Senator and potential 2020 Democratic presidential candidate Kamara Harris (D-CA), who’ve asserted that she stands behind Schaaf’s decision ‘100 per cent,’ because she was doing what she thought was in the best interest of her community.  Harris has been critical of the decision of the Justice Department (DoJ) to file a lawsuit against California’s sanctuary laws, saying the administration is trying to ‘turn back the clock,’ and that they’re ‘scared of the future.’ She also opined that ‘this administration [Jeff Session’s DoJ] is using our tax dollars to engage in a political game instead of what’s in the best interest of Californians.’

What kind of people were ICE targeting in their raid? A total of 232 illegal immigrants was arrested during the operation, where 180 of them ‘were either convicted criminals, had been issued a final order of removal and failed to depart the United States, or had been previously removed from the United States,’ according to ICE. These arrests also include 115 people whom ICE claimed to have ‘had prior felony convictions for serious or violent offenses, such as child sex crimes, weapons charges and assault, or had past convictions for significant or multiple misdemeanors.’ ICE said that the state’s ‘sanctuary city’ legislation had restricted the agency’s ability to enforce immigration laws.

Even when knowing she is under federal investigation, Schaaf still doesn’t regret her action after all the backlash, saying that ‘I did what I believe was right for my community as well as to protect public safety. People should be able to live without fear or panic and know their rights and responsibilities as well as their recourses.’

A recent poll by Rasmussen Reports shows that ca. 47% of American voters agree with Spoilbor that Schaaf should be prosecuted by the DoJ for obstruction of justice.

ICE spoke of the consequences of her decision in a recent press conference:

Recent legislation has negatively impacted ICE operations in California by nearly eliminating all cooperation and communication with our law enforcement partners in the state by prohibiting local law enforcement from contracting with the federal government to house detainees.

Ultimately, efforts by local politicians have shielded removable criminal aliens from immigration enforcement and created another magnet for more illegal immigration, all at the expense of the safety and security of the very people it purports to protect.