UK – Labour head Jeremy Corbyn has been widely criticized following controversial statements asserted for an interview with BBC News’ Andrew Marr on April 15. One of these was an attempt to push against the opinion tide in favor of the recent airstrikes on Syrian chemical facilities initiated by Mrs. May along with the French and American Presidents by calling it ‘legally questionable’ and suggesting there to be a possibility that Assad was innocent.

He added, ‘If we want to get the moral high ground, as a country with a history of international involvement, then we need to abide by international law.’ Proposing this turned several of even MPs of his own party against him:

Listened to the Today Programme. I wish my frontbench would spend even a fraction of the energy on Assad and Russia’s grotesque slaughter of civilians as they are on inventing new reasons to oppose targeted UK intervention to stop it.

Watched Corbyn interview on #Marr again. Sorry to say my Party is led by a man who questions Russian responsibility for Salisbury, who rejects action to stop Assad use of chemical weapons, who opposes Humanitarian intervention and gives Russia a veto on UK action #NotInMyName

Corbyn is also later today expected to call for a vote to have an emergency debate to ask Theresa May to consult with Parliament before initiating military action in the future, with the possibility of MPs from his own party speaking against him in the house.

In a sense, however, he has the British people on his side with criticism against the hasty attacks against Syria. A recent YouGov poll showed that only 22% of Britons supported the airstrikes, 43% opposing, and 34% who’re not sure. This is despite 61% voting that they believed it was probably the Syrian government who stood behind the chemical attacks. As the report of YouGov shows, however, the opinion polls on this can change quick, as when the opinions levelled out after Corbyn condemned airstrikes in Syria in 2015: 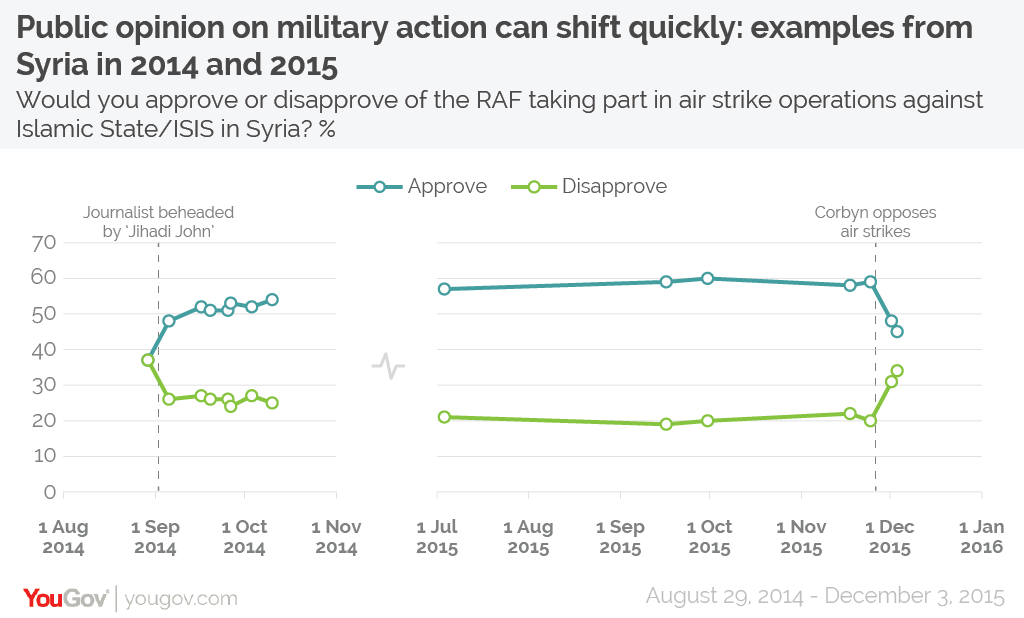 This illustrates that the responses of influential politicans can quickly turn the tide of popular opinion, which Corbyn seems to try to take advantage of again now, to see if it works as well as it did two years ago.

He spurred a second controversy in the interview by also proposing that the title as Head of the Commonwealth should not continue to be based on heritage, but rather on a democratic term-based election. In other words, when the Queen finishes her duty, the people of the 53 nations of the Commonwealth should themselves choose who to become the next leader, rather than Prince Charles gaining it by default in succession. He said specifically that ‘The Queen clearly is personally very committed to the Commonwealth but after her I think maybe it’s a time to say well actually the Commonwealth should decide who its own president is on a rotational basis.’

A third matter he spoke of was a call for May to use this week’s summit to apologize formally to the Commonwealth for Britain’s historical wrongdoings. However, as Foreign Secretary Boris Johnson pointed out, there has been no suggestion or support for this by ‘any Commonwealth leader, foreign minister or sherpa,’ adding that ‘It’s not a proposal that, as I understand, carries much support amongst the 53. I think it may have emanated from the Labour Party… it’s not a proposal.’ It’s strange how Corbyn should expect May to use valuable time on the summit for such an irrelevant matter without any context whatsoever.

His own party members and MPs turning against him may lead to attempts for a change of leadership at Labour. Supporting a party for its politics whose leader you strongly disagree with doesn’t usually work very well out, and thus calls for a need for a new one whom more adequately embody the party’s values and ideology. It’s yet to early to make such a prediction, but with the scale of these controversies, the possibility is there.