The American stock market faced a bleak downturn this Tuesday as major indices plunged. The three biggest, Dow Jones Industrial Average, S&P 500 and Nasdaq have all fallen over 3%, with Nasdaq at the biggest loss of 3.8%.

Indices in Europe and Asia also fell quite a bit, albeit to a smaller degree.

Mark DeCambre of MarketWatch has attributed this downturn to a “yield curve inversion”, meaning that the short-term return on treasury bonds has risen faster than the long-term return. He writes that this feature is “signaling a breakdown in the natural order of bonds.” 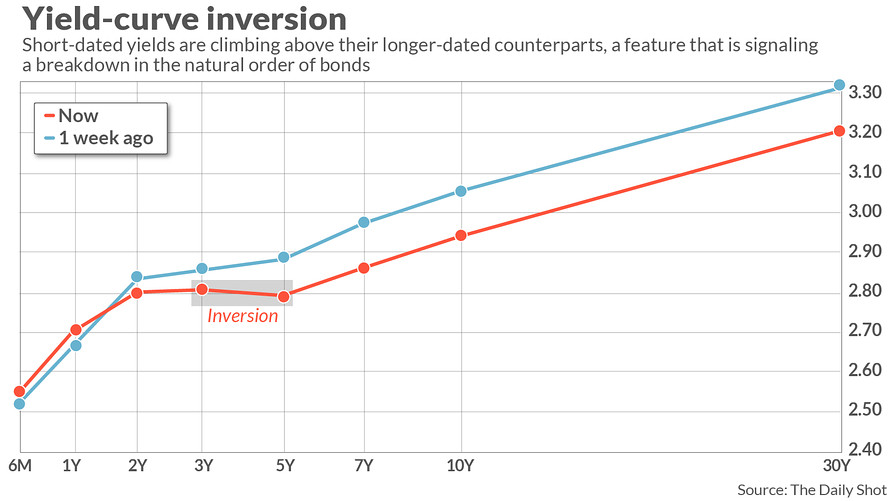 Howard Schneider and Jonathan Spicer of Reuters claim that such a yield-curve inversion “has been a reliable predictor of recession, though sometimes several months later, as confidence in the economic future erodes.” A colleague of theirs points out that “It is not a sure indicator, however, with an inversion in 1966 and a very flat curve in 1998 failing to lead to recessions.” Despite the uncertainty, Federal Reserve officials are still “unfazed” by the downturn, as Schneider and Spicer put it, as they believe it may just reflect

long-term shifts in global capital flows, or the fact that all interest rates are lower and more compressed together than they used to be. The central bank’s own large balance sheet may even be a culprit, by helping hold down long-term rates.

The New York Fed President John Williams even claimed that the economy remains strong and that the federal funds rate is set to be increased through 2019. He further said that “Sometimes there will be market reactions or interpretations of things that move around. But I think I’m focused on our goals and getting the policy right.”

Analysts at Capital Economics have a different outlook, claiming that there’s no reason why this yield-curve inversion should be judged differently from the recession predictor it has been in the past. This inversion, they say, “is mainly indicative of worries about how long growth in the U.S. can remain so strong.”

This is not the first indicator that a recession may be upcoming, however. As Visual Capitalist reported in November, FAANG stocks (Facebook, Apple, Amazon, Netflix and Alphabet Inc.) have all entered bear markets, falling between 20% and 40%. Some of those who accurately predicted the Great Recession of 2008, foresee another recession approaching the horizon. Peter Schiff, the CEO of Euro Pacific Capital, for instance, believes that the recent economic boom is just a massive bubble, and during the recession claimed that the Great Recession only was the beginning and that the main impact had yet to come. Now that the Federal Reserve is starting to increase the federal funds rate more after keeping the federal funds rate artificially low for many years since the last recession (see chart below), capital allocated in long-term malinvestments under the bull market may finally be able to readjust (i.e. overvalued stocks fall to their opportunity cost and undervalued ones rise to theirs) under such a recession.

The Federal Reserve, however, sees no such recession upcoming and may react in the same manner that they did under the last one, as a case in point that nothing had been learned.

It isn’t rocket science. The 2008 financial crisis was a debt crisis. We took on too much debt because the Fed held interest rates too low to stimulate the economy out of the mild recession that began in 2001, after the dot com bubble burst and the Sept 11th terrorist attack….

Nick Giambruno simplifies things in an article he recently wrote for the International Man. He just calls it the “everything bubble.” And he says it will pop in the near future thanks to the Federal Reserve. https://t.co/x3zXX1uv1P

…..Because the Fed held interest rates much lower for much longer following the 2008 financial crisis and Great Recession, the current debt bubble is much larger. So the next financial crisis will be much worse, and the recession much greater, after this deb bubble pops…….

……..The other significant difference is that the Fed is out of bullets. Stimulus won't work. The only thing the next round of QE and ZIRP will inflate is the cost of living. All the Fed's horses and all the Fed's men will not be able to reflate America's bubble economy again!