Due to recent events, President Trump’s eldest son, Donald Trump Jr, is divorcing his wife of 13 years, Vanessa Trump. Trump Jr has conceded to the divorce and has agreed to pay Vanessa and allow her to have custody of the children. The couple have 5 children, ranging from ages 3-10 years old.

Trump Jr and his wife have been in the headlines a lot recently: Trump Jr being accused of collaborating with a Russian Lawyer (who Obama had several meetings with beforehand), Vanessa Trump getting hospitalised by dangerous white powder and Trump Jr being asked to give documents from Trump Tower over said collusion with Russia. However, these events are not said to be the reason Trump Jr is being divorced According to those close to the couple, they have been drifting apart for some time and a divorce wasn’t a question if – it was a question of when. Vanessa Trump states her reasoning for the divorce saying that she is unhappy about Trump Jr’s constant travelling, how little time they spend together as a couple and Trump Jr’s use of his social media.

Speaking of social media, many media outlets are now celebrating the divorce between Trump Jr and his wife. 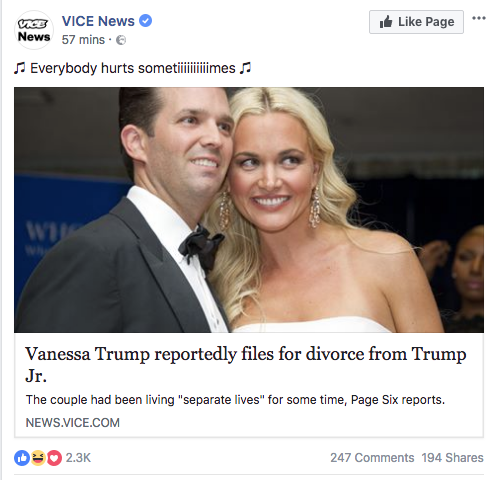 If a media company wants to look trustworthy and non-partisan then maybe it’s a good idea to not mock a president’s son for getting a divorce, report the raw facts and leave the opinions to the viewer. 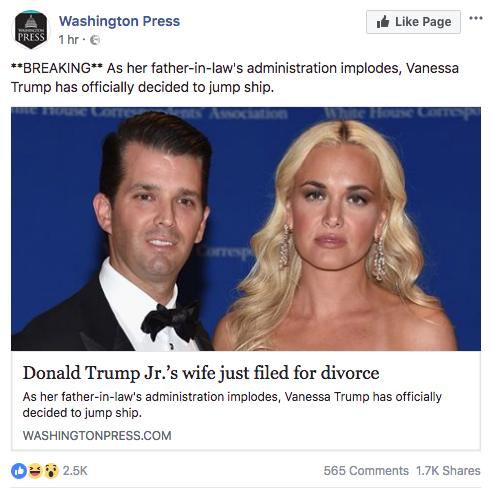 The Washington Press takes the opportunity to unnecessarily spread fake news over Trump Jr’s father’s administration ‘imploding’. Can somebody tell them that unemployment is at its lowest in the US in 17 years, 2.5 million jobs have been added since January 2017, the economy is booming and women in the workforce has reached an all time high – all thanks to President Trump’s ‘failing’ administration. We at Goldfire Media are all for being fair to both sides of the argument but we wont stand for outright lies. The mainstream media will always be known as…