Devin Nunes, republican superstar congressman from the state of California, has once again demonstrated his courage and acute sense of what’s right by calling Trey Gowdy out for his support of the FBI misconduct that so obviously took place.. Devin Nunes once again shows that he isn’t afraid of taking on the deep state. Many in the establishment keyed in on the moment Trey Gowdy laughed at the idea of a implanted spy, and said “confidential informants” were normal, and used everywhere. Devin Nunes disputes this claim.

Gowdy went on Fox last week and not only dismissed President Trump‘s “SpyGate” claim, but also went out of his way to defend the FBI’s actions and said, based on everything he knows, that the FBI acted appropriately and in a way Trump himself would have wanted. However, Nunes emphasized, in his own fox news interview, that this is what Gowdy “believes” based on what he’s seen. Gowdy made his comments after an intel briefing over a week ago(where no intel was even shown)

Congressman Devin Nunes appeared on Fox News to speak with Maria Bartiromo, and right off the bat she asks him about what we all wanna know, what compelled Gowdy to make the comments he made.. “Mr. Gowdy loves the FBI and the Department of Justice,” Nunes told Bartiromo. “I think all Americans want a good Department of Justice and FBI doing their job. And if they’re targeting Russians or Chinese or what have you, that’s what we expect them to do. However, the challenge we have in this is that they actually targeted a political campaign that was Donald Trump, and that’s where I think…even though Mr. Gowdy believes that the President’s not a target of this investigation, his campaign is and that’s where I think the challenge occurs.” Bartiromo then straightforwardly asked Nunes whether or not the FBI did the right thing with the Trump campaign. Nunes answered by calling, once again, for Deputy AG Rod Rosenstein to hand over the documents that he’s been requesting for over a year.

Then, the subject shifted to Google, which recently came under heavy fire for having “Nazism” as the first ideology match for the California Republican Party. This happening just a week before the California primary “Yeah, so we’re on the frontlines out here in California. I always say this: I’m used to getting attacked, I like getting attacked by these crazy leftists. What the American people need to understand is that there is bias against conservatives and Republicans all across this country…”Now as you see it getting into the internet. This is one of the challenges we have with millenials. When you look up republicans on google, and then they come up as ‘Nazi’, nobody wants to be affiliated with Nazis.”… Nunes then exposed the censorship of Drudge Report on twitter. Being the real conservative that Nunes is, he says that he believes there is a free market solution to the issue of censorship. Although he did concede that if no one was able to compete with google, we were looking at a Monopoly that needed correction. Alex Jones of Infowars said that Bing, Microsoft search engine, is just the like the old google in terms of being unbiased. 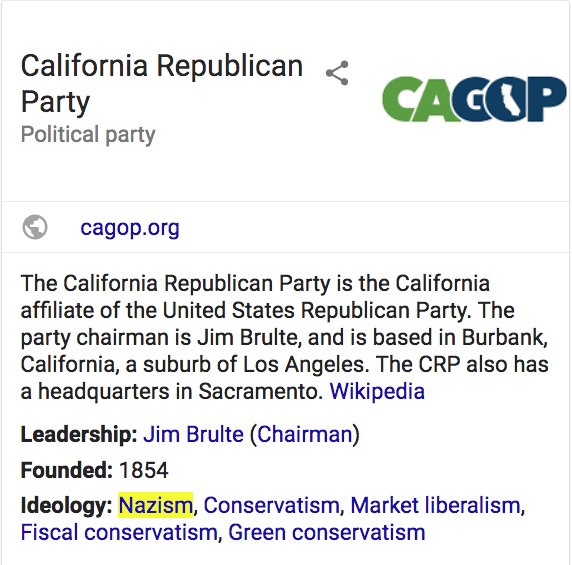 Patriots of this country can take great pride in knowing that we have such great American patriots like Devin Nunes our president, who both refuse to back down to the global elite who have consistently extracted wealth from this country through taxes, loopholes, and purposefully bad trade deals around the world