With so much misinformation in the media and politics today, it becomes difficult to know who to trust, no matter which side of the aisle a person is on, or even those in the middle. The best bet is to listen to what each group has to say, no matter how difficult, and then do your best to follow actual documents, voting records, policy statements, and presidential papers to see was was actually done. In reviewing the last administration, which is the last for which the record is complete, it becomes apparent how huge the inconsistencies between words and action can be.

Since they are the simplest of the Presidential tools, let’s look at the most seemingly innocuous: proclamations, and the overreach of presidential authority though their use. Understand that Obama is not the first to overextend his reach through the use of proclamations. FDR, Wilson, Carter, Clinton, and the Bushes have all been notable in their overuse of, and overreach through the use of, proclamations, signing statements, etc. But, with the possible exceptions of Wilson, FDR, and Clinton, Obama has outreached them all when you look at the combined number and especially the scope of his use of the Presidential tools — so much so that his “use” of presidential proclamations, orders, and statements certainly seems to be more appropriately termed “abuse”.1
Like Clinton, Obama has used these proclamations, which were designed to be simple declarations of special days or public policy, and which aren’t supposed to have the force of law without Congressional approval, to enact changes in trade regulations and, in at least one case, to declare a state of national emergency for medical reasons (Proclamation #8443, signed 10/23/09 declared a state of emergency for the H1N1 flu virus, providing free flu shots, but also requiring healthcare workers to follow ‘emergency plans’ as decided by their facilities, basically giving the facilities what amounted to presidentially-approved power to fire anyone who did not want to be injected with their facilities’ flu shot). So, what exactly did Obama say in his proclamations that should give us pause?

Proc
Date
Provisions provided by proclamation
8394
06/09/09
Changes preferred status and/or competitive need designations for the purpose of charging tariffs to specific goods imported by specific countries under the Trade Act of 1974.
8405
08/31/09
Changing the rules of origin for goods with respect to NAFTA (trade agreement between Canada, US, and Mexico), and USIFTA (trade agreement between US and Israel) in 1988.

8414
09/11/09
Changing the Trade Act of 1974 with respect to tires from China.
8467
12/23/09
MAJOR trade changes to MANY countries/agreements (*see below)
8468
12/23/09
Changing beneficiary status for African countries under the AGOA (African Growth and Opportunity Act) – gives preferential status to ISLAMIC Republic of Mauritania.
8536
06/12/10
Changing statuses and tariffs for countries under the following trade agreements: CAFTA-DR (2004: Central American Countries), NAFTA, USSFTA (Singapore-US), USIFTA, and USCFTA (Chile-US).
8539
06/29/10
Remove beneficiary status for several countries under the Trade Act of 1974.
8596
11/01/10
Changing rules of origin for status and tariffs for countries under the Omnibus Trade and Competitive Act of 1988, NAFTA, and USBFTA (US-Bahrain), including Haiti, El Salvador, and the Dominican Republic
8618
12/21/10
Changing beneficiary status for the Democratic Republic of the Congo and changing the list of duty free chemicals and pharmaceuticals from Uruguay under AGOA.
Proclamations #8467 and 8468(*) are especially interesting in terms of both what they say and what they don’t. Like several of the proclamations above, these change the terms for the rules of origin to decide which goods are from countries that benefit from trade agreements, many of which have been successful since 1974. These proclamations also tend to change the status of specific countries for the sake of how we treat them in respect to trade taxes/tariffs that we charge when they send goods to sell here in the U.S. Some countries get breaks, and usually these are the poorer countries, designated, for example, as “least developed beneficiary”, or ending the breaks for countries with a “high income” designation. Here, proclamations 8467-68, Obama removed the benefits for the countries of Trinidad and Tobago, Equatorial Guinea, Niger, Madagascar, Cape Verde, the Republic of Maldives, and Croatia. He only added beneficial status to one country: The Islamic Republic of Mauritania.

From 2008-2016, Obama made an additional 28 proclamations that affected trade regulations. What’s interesting is that, in the group of 9 proclamations listed above, only 8467-68 have annexes that are able to be viewed on the Federal Register website. Very few items in the Federal Register of laws/rules are unable to be viewed online, yet 7 out of the 9 proclamations on trade rules from 2009-2010 cannot be viewed to see exactly what was done and to whom. It was only through a long process of tracking down the information through the Harmonized Tariff Schedules, cross-referenced with the proclamations, that sense could be made at all of what the proclamations were intended to accomplish. Although the Federal Register is required by the Constitution to be published and distributed to the public, it is not required, by law, to be available online. The House of Representatives tried to pass a bill to get online publication included, but it was left to die in a Democratic Senate…twice.

An in depth explanation would require a long and complex look at the Harmonized Tariff Schedule (HTS) of the U.S., which is about as lengthy and technically complex as the federal income tax code. Basically, the HTS is a list of how much we charge other countries to allow them to sell their goods in our market –all countries, with four to six digit numbers assigned to each type of good – which is why I do not want to attempt to cover this classification schedule in its entirety here. One very noticeable trend, however, especially in light of world events over the last 8-25 years, is the trend toward rewarding countries with known or suspected ties to radical Islam, as well as the tendency to stick it to Israel at every opportunity.

When looking at the HTS for Israel, specifically at the amount of items they are allowed to send us ‘duty free’ (without paying a tariff; most countries are allowed some amount of this) each president has increased the number/amount of duty free items slightly, to account for factors such as inflation and population growth in the U.S., each year. At least, they did until Obama. For example, here’s an annual breakdown from 1996 (when Bill Clinton was president) of the HTS showing how much Ice Cream Israel is allowed to send us duty free each year:

Notice anything? That’s right, all 8 years of Obama’s Presidency saw no increase for Israel. Of course, Obama made magnanimous-sounding statements about “continuing our relationship with Israel” by simply continuing the duty free agreements themselves, but failed to mention that he has denied them the standard increase that they had previously received, and which most other countries have still gotten. At the time he did this, right up until the end of his presidency, no one would have believed that our ‘diversity and unity’ President could act in such a seemingly anti-Semitic manner. But, of course, now we should all know better: On his way out of office, on a Friday evening in December 2016, he made sure to give Israel one more snub when he purposely decided that the U.S. would abstain from blocking a UN measure that would have protected their rights to continue claiming their hereditary rights to the Wailing Wall and the Temple Mount, their holiest sites for hundreds of years.

The other misuse of Proclamations has to do with the amount of land grabbed by Obama for Federal property through the declaration of “National Monuments”. One of the foundational freedoms that our nation’s founders wanted us to enjoy was the right to property ownership. The American revolutionaries were tired of being treated as little more than serfs by the British. They worked the land for generations, only to find themselves either taxed beyond their ability to pay and thereby forfeiting their lands to the crown, or having their lands directly seized by the monarchy or government for other uses. The rallying cry of the American Revolution movement was that they were no longer going to accept taxation and legislation “without representation”. The appropriation of property, and tax upon its ownership, was high on their list of grievances. Again, they included specific instructions regarding property.

Article IV, Section 3: “nothing in this Constitution shall be so construed as to Prejudice any Claims of the United States, or of any particular State.”
Amendment V (1791): “No person shall be held to answer for a capital, or otherwise infamous crime, unless on a presentiment or indictment of a Grand Jury, except in cases arising in the land or naval forces, or in the Militia…nor be deprived of life, liberty, or property, without due process of law…”;
Amendment XIV, Section 1: “nor shall any State deprive any person of life, liberty, or property, without due process of law”
Yet, Obama used Proclamations to do just this: to claim lands, that should belong to the people through their States, for “National Monuments”. He, like other Presidents, has claimed authority from the Antiquities Act of 1806, first used by Teddy Roosevelt. But the problem with that is in the sections of the Constitution above. Plus, the Antiquities Act even states that areas claimed for National Monuments must be limited, such that “the limits of which in all cases shall be confined to the smallest area compatible with proper care and management of the objects to be protected”.

Let’s look at exactly how much land has been grabbed, and where it is. You can find a map of land claimed by the Federal Government for their administration and/or use at the Bureau of Land Management’s own website:

So, do you truly think we needed over half a billion acres, mostly borders and coastal or sea lane areas, for “National Monuments”? If so, why? If not, then what on earth has Obama grabbed so much land for? Whatever the reason, it’s quite clear that this is not what the founders had in mind at all when they protected our person and property from seizure, and said that our citizens should not be deprived of property without due process of law. THIS is why we must look deeper when trying to make sense of the political debates raging in media today. People can say anything, but it is a far greater indicator of their beliefs and values to see what they do.

(Find the papers of every administration in full text at The Presidency Project http://www.presidency.ucsb.edu/ from UCSB, or the Federal Register, limited online availability.) 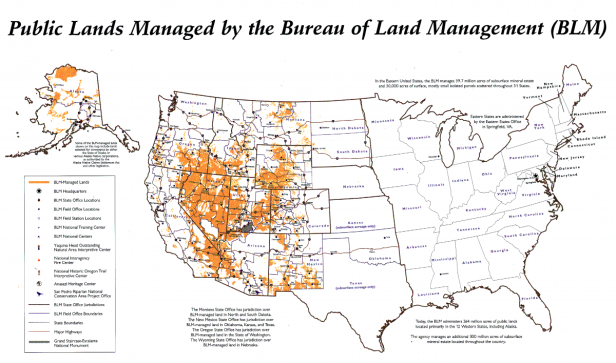