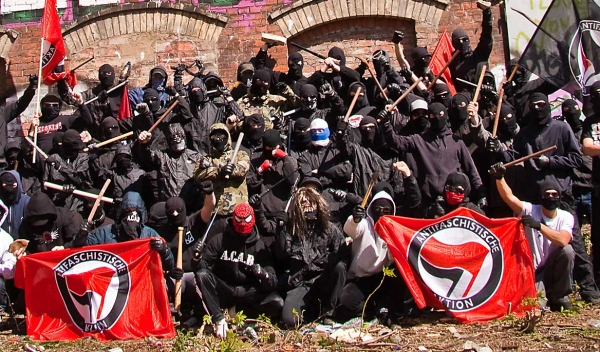 Following the very recent incidents of left-wing activist groups counterprotesting in Portland, Oregon and Vancouver, Washington, we could all know about one thing certain: the counterprotests groups that are aiming for fighting against hate, is sure not doing it properly. The “antifascist” groups responded to peaceful protesters, and then local police, by attacking them with batons, homemade shields, smoke bombs, and throwing random objects at them. Is this how to even make progress to end so-called “fascism”?

Ever since Donald Trump was elected president by 306 electoral votes, although a popular vote lower than Hillary Clinton by 2,868,691 votes, outrage, protests and riots, had started to spark within most major cities throughout the entire nation. Protesters wielded signs, shouted, and all called together to unite against the president-elect, while claiming that fascism has arrived into America, as well as comparing the president-elect with the well-known totalitarian German Chancellor Adolf Hitler and comparing his supporters and voters, “Nazis”.

However, a large fraction of voters did not vote for the Republican businessman because they wished for political injustice, or to restore systematic ethnocentrism, but, they were unhappy with illegal immigration, they were unhappy with insurance premiums under Obamacare, and they were unhappy with the large-scale of wars and troops sent to fight in them that have started since George W. Bush entered power, and then Barack Obama took control of. These supporters wanted a different choice other than the former Secretary of State Clinton, because they no longer trusted their government members, and believed a new person who may not be experienced, would represent their ideas better.

However, many anti-Trump activists criticize Trump for his politically incorrect statements about Mexican people during the beginning of his campaign. “They’re bringing drugs; they’re bringing crime. They’re rapists, and some, I assume, are good people,” he notably said.
They also accuse him for his misogynistic words, most notably, the “Grab them by the …” line, which he said in a 2005 conversation with the then-host of “Access Hollywood”, Billy Bush, in which he also spoke other typical men’s locker-room talk, while not knowing that he was being recorded.
Many people claim due to words like these that he said, as well as his ridiculing of Fox News commentator Megyn Kelly, during an interview with CNN’s Don Lemon, indirectly referring to her being on her period during the recent Republican debate. “You know, you could see there was blood coming out of her eyes; uhh, blood coming out of her.. whatever.”
With these, many Democrat supporters across the country, label Trump as a misogynist, using these pieces of evidence, as well as some other minor examples, and they get angry with women who have supported Trump, as well as immigrants of Latino and Islamic countries who have supported him, rather than the so-called politically correct Hillary Clinton.

With this, division rose within the country, with many claiming that the 2016 election was the most divisive election in U.S. history.

Trump was elected, and, on inauguration day, more protests happened, this time in the national capital, the District of Columbia, with police being involved, using batons and tear gas, and then Antifascist Action (Antifa), responded by smashing windows of local businesses. This led to injuries, vandalism, and arrests, between both sides, and the innocent business owners who had their buildings used as a war zone without their permission.

What was wrong here? If Antifa was meant to fight fascism, why would they be targeting non-political civilians and civilian property?
There were many other incidents that happened in Free Speech rallies across the country, aiming for the innocent non-aggressive people. One such moment, was an elderly woman in boston, being pulled and pushed into the ground, just for carrying an American flag.

This, however, is not so-called self-defence against “fascism” and “White supremacy”. Fascism by definition is authoritarian nationalism, forced control of industry and commerce, and most importantly, forced suppression of speech that is against their beliefs.
These aspects were all part of Adolf Hitler’s Nazi Germany, and now the “Antifascist” group today labels the Republican Donald Trump as seeking these traits, and labels their supporters as wishing to objectify women, and to put anyone who is not of European descent, into concentration and death camps. Trump’s America is not “textbook fascism”.
The actions of Antifa are actually more comparable to the “fascism” that they’re aiming against.

But rather than talking about the group like they’re a bunch of people who are evil, and need to face disciplinary action, because advocating further hatred is actually not the best option to go in a society like this, we need to give constructive criticism about this group.

Numerous claims of racism still existing in the United States, are actually true. However, governmental racism has been long over for decades. The only racism that exists are by civilians, and police officers, many of which are punished after being caught with racism, and not following correct procedure.
White supremacist groups indeed exist, and have wide support, although lower than many decades ago. The most well-known of these is the Ku Klux Klan. They aim for the superiority of Whites, against minority groups, and while being motivated by certain religious scripture that advocates such actions they find necessary.
This group, is the real definition of White supremacy. If Antifa really is a group that is against racism and hatred, then what they should do, is gather up like they do now, but in a private area first, search for the nearest Ku Klux Klan meeting, preferably in more remote rural areas—since they’re more active there and that’s where they perform their cross-burning ritual—and then take offensive measures against them there—away from non-combatant civilians, and while making sure the correct enemy is in the line of sight.
This, would make the group a much more meritable group, and would make people like even me, support them.

Fighting people on the street and vandalizing their belongings just because they voted for one political candidate that you wish to believe is Adolf Hitler, is not the way to go, Antifa. Those people voted through a peaceful election, and were influenced by being isolated and shunned by groups like you that think that dividing yourself among others is the way to prevent “fascism”.

On final note, both left and right-wing sides have violent hate groups, and both sides generalize each other as these violent groups. The left and right has a lot of very moderate, enlightened individuals who are aware of the world around them, and just seek different opinions on issues in which they were not propagandized to believe. In order to prevent national division and hatred, we must avoid political violence, unless an absolute emergency against someone who directly poses a direct threat. Politics should be about getting reliable information, and respecting each other, even if one doesn’t agree with the other’s views. Remember this, and follow this, as this is the real way to oppose authoritarianism and oppression of opposition.