It’s not clearly indicated whether the BBC is having a slow news day or if the British mega news conglomerate decided to go full SJW across all topics they’re covering, might as well rebrand themselves as another Buzzfeed or Vice. 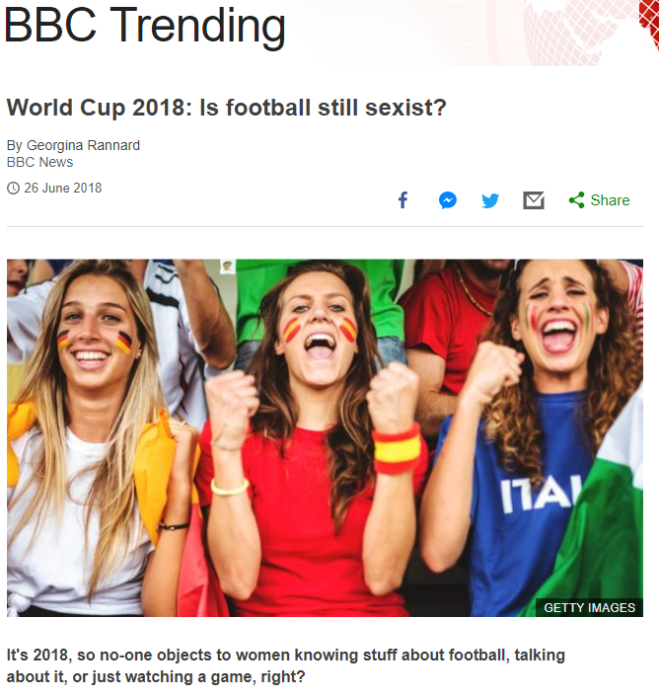 The lazy, under-researched social justice-preaching article cited zero evidence to back up their claims of institutionalized gender inequality. The best BBC could come up with happens to amount to no more than sharing retweets from Buzzfeed writers. Many of the Twitter complaints include news outlets still posting articles and pictures of attractive female fans of the sport, no doubt it’s “objectifying” women… Or how about men underestimating the female interest in the sport? It’s the current year of course, liberals want to tell you women are just as capable as men at all activities, including the knowledge of this fine sport.

“Jokes mocking women football fans have been circulating, suggesting that they don’t really understand football and that they are watching the World Cup only to impress their boyfriends, to seek attention, or to check out handsome and muscular footballers.”

This term shall be known as “muh women knowing stuff”
Except, they don’t. Statistics clearly show women are nowhere near as interested in the sport of football compared to men, the numbers below is relative to BBC’s country of origin as it states British women only makes up for 7% of football-related video views on youtube, which indicates how few there are compared to the rest of the  football demographic, which an overwhelming majority exceeding 50% belongs to men aged 18-24.

Another incident these rampant third wave feminist twitter users have blown way out of proportions is the case of a Brazilian reporter who was “sexually harassed” on camera, while working, a football fan attempted to kiss her (without avail) on the cheek, before disappearing out of sight. Completely ignoring the intentions of the man, who obviously tried to prank on live television, the SJWs made this action out to be something that seems to happen all the time.

Since when did this action of an individual proves football culture is sexist? How can one man represent all football fans present at the world cup? Leftists always say the actions of the individual don’t reflect upon the rest of the demographic when it comes to a minority or immigrant commits a crime, so why act all collectivist now?