Uh-oh. Sparks are about to fly. Just one day before the SOTU at that. How many Dems took bribes?
Was Schumer on the list? Looks like Pelosi is…

“El Chapo” is accused of being behind the ultra-violent Sinaloa drug cartel of Mexico, which is the largest supplier of drugs to the united states.

Guzmán, 61, has been on trial in Brooklyn since November after he was extradited from Mexico to face charges of trafficking cocaine, heroin and other drugs as leader of what the US has called the world’s largest drug cartel.

Whitaker joined US Attorney Richard Donoghue in Brooklyn federal court, where he shook hands with prosecutors in the case.

His appearance came just after jurors in the case retired to begin discussing the charges against Guzman at the end of the months-long trial.

During the course of the trial, we have come to find out that El Chapo had been bribing the former president.

Alex Cifuentes, who says he was a close associate of Guzmán for years, told a New York City courtroom that he had also told authorities of the bribe in 2016.

What’s interesting about this, is that open-border cheerleader Nancy Pelosi is known to be close “friend” to, and has been spotted with the now-former Mexican President. Democrat Texas Senate candidate Robert “Beto” O’Rouke, who ran a 70-million dollar open borders campaign, has also been seen getting chummy with Nieto. 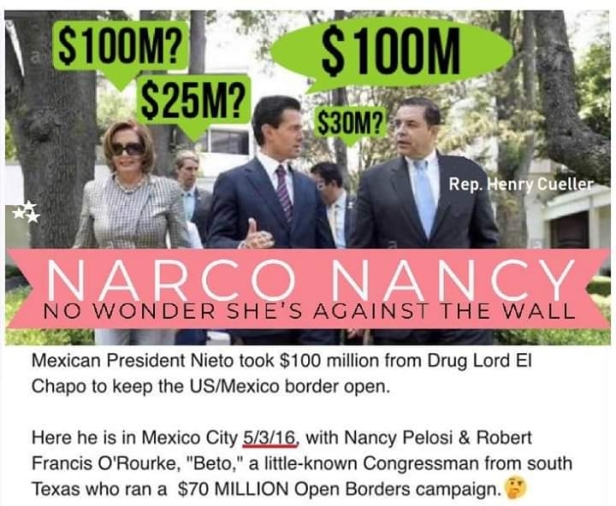 A former Democrat, who has now walked away, believes the real reason Democrats don’t want a wall on the US – Mexican border is related to the story above. He used to work in Arizona politics and has experience the world of the “Arizona Mafia” first hand. You can learn more about that here.

A big time lawyer for the Mexican cartels also donated to Hillary Clinton. Julian Assange reported that he had evidence that the Clinton Foundation received $15 million from the Mexican cartels. On 9 January 2017, the web site Times.com.mx published an article reporting that Mexican Drug kingpin Joaquín “El Chapo” Guzmán had donated millions of dollars to Hillary Clinton’s 2016 presidential campaign. WiikiLeaks founder Julian Assange had broken the news.

No wonder the Dems don’t want a wall.